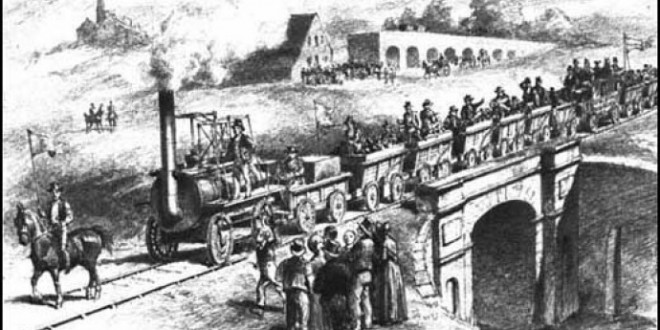 The Stockton and Darlington Railway, which opened in 1825, was the first permanent steam locomotive railway.

The line was 26 miles (40 km) long, and was built between Darlington and Stockton-on-Tees and from Darlington to several collieries. The line was initially built to connect inland coal mines to Stockton, where coal was to be loaded onto sea-going boats.Opening of the Railway, Sept 27, 1825

The line opened on September 27 1825, with Stephenson’s new locomotive ‘Locomotion No. 1’ pulling 36 wagons carrying a mix of coal and flour as well as guests and workmen. The initial journey was slow, averaging just over 4 miles per hour; however in the final descent to Stockton the train reached 15 miles per hour and badly injured a passenger who fell from the wagon

Much of its route is now served by the Tees Valley Line, operated by Northern Rail.

Inspired by wealthy local wool merchant Edward Pease, the Stockton and Darlington Railway was authorised by Parliament in 1821 and was initially intended to be an ordinary horse-drawn plate way, which were then commonplace in England around that time.

George Stephenson, however, had been perfecting his engines at Killingworth for about seven years, and had built the Hetton colliery railway. With a deputation from Killingworth, he persuaded Edward Pease, on the day that the Act received Royal Assent, to allow him to resurvey the route and work it, at least partly, by steam.

Accordingly, a new Act of Parliament was obtained approving Stephenson’s changes to the route, and a clause added to permit the use of “loco-motive or moveable engines”. This latter clause narrowly escaped being struck out of the bill due to officials not understanding the meaning. The bill also included provisions for transporting passengers though, at the time, they were regarded as little more than a sideline. 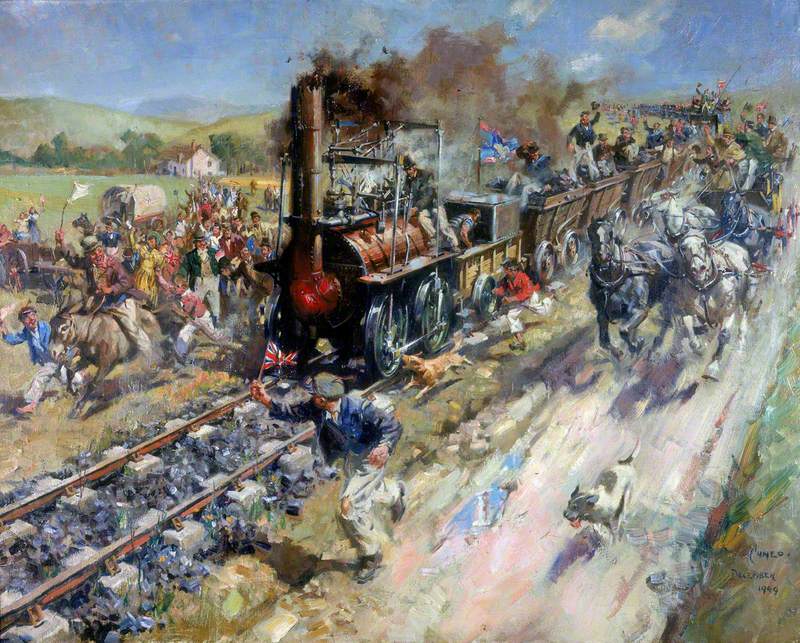 Steam locomotives were then a new and unproven technology, and were slow, expensive and unreliable. The initial impetus for steam power had come during the Napoleonic Wars, when horse fodder had become very expensive, and had still not settled down, while improving transport and mining methods was making coal more plentiful. However, many people weren’t convinced that steam engines were a viable alternative to the horse. So at first, horse traction predominated on the S&DR, until steam could prove its worth.The line was twenty six miles in total, with two cable-worked inclines at the western end, joined by a short horse-worked section. From Shildon the line was relatively level through Darlington to Stockton. The line’s structures included one of the first railway bridges. Designed by architect Ignatius Bonomi, the so-called ‘first railway architect’, the Skerne Bridge in Darlington is the oldest railway bridge still in use today. The bridge was also commemorated on the Bank of England 5-pound-note. SD&R’s track gauge was required to accommodate the horse-drawn wagons used in the the older wagonways serving coal mines. This influence appears to be the main reason that 1435 mm (4 ft 8″ in) was subsequently adopted as standard gauge.

The first locomotive to run on the S&DR was Locomotion No 1, built at the Stephenson works. “Locomotion” used coupling rods rather than gears between the wheels, the first to do so.

On the official opening of the line (27 September 1825); the first steam-hauled passenger train ran and carried up to 600 passengers. The first passenger train was not fast, taking two hours to complete the first 12 miles (19 km) of the journey. Most of the passengers sat in open coal wagons but one experimental passenger coach, resembling a wooden shed on wheels and called “The Experiment,” carried various dignitaries.

Three more engines were built similar to Locomotion then, in 1826, Stephenson introduced the “Experiment” with inclined cylinders, which meant that it could be mounted on springs. Originally four wheeled, it was modified for six.

Not all engines came from Stephenson. Also during 1826, Wilson, Robert and Company, of Newcastle, produced one for the line which, rather than use coupling rods, had four cylinders, two to each pair of wheels. After suffering a collision it was not rebuilt. These early locomotives were slow and unreliable and Hackworth set out to produce an improved design and in 1827 introduced the Royal George, salvaging the boiler from the Wilson engine. He also invented a spring-loaded safety valve, because drivers had been tying them down to prevent them opening when the loco went over a bump.

Steam traction was expensive in comparison to horse drawn traffic, but it soon proved that it was viable and economic. Steam locomotives could haul more wagons, and haul them faster, so in a typical working day the expensive steam engine could haul more coal than the cheaper horse. It soon became apparent that mixing faster steam-hauled and slower horse-drawn traffic was slowing the operation down, and so as steam technology became more reliable, horse-drawn traffic was gradually abandoned.

The S&DR was set up to mirror the operation of the road system of the time; the infrastructure was owned by the shareholders, who leased the use of the line to anyone who had the money and the rolling stock. There was no timetable, and disputes frequently arose over right of way.

By 1833 the S&DR was completely steam-operated, and was now the sole operator of the line. Two tracks were laid, with trains operating in one direction on each, timetables were drawn up, and even a crude form of signalling installed to control movements. Methods of operation were established at the S&DR which are still used today.

The S&DR proved a huge financial success, and paved the way for modern rail transport.
The S&DR was absorbed into the North Eastern Railway in 1863, which merged into the London and North Eastern Railway in 1922. Much but not all of the original S&DR line is still operating today.The expertise that Stephenson and his apprentice Joseph Locke gained in railway construction and locomotive building on the S&DR enabled them a few years later to construct the Liverpool and Manchester Railway, the first purpose-built steam railway, and also his revolutionary Rocket locomotive. The company also proved a successful training ground for other engineers: in 1833 Daniel Adamson was apprenticed to Timothy Hackworth, and later established his own successful boiler-making business in Manchester.