Home / History of Stockton / Stockton from Past to Present Day 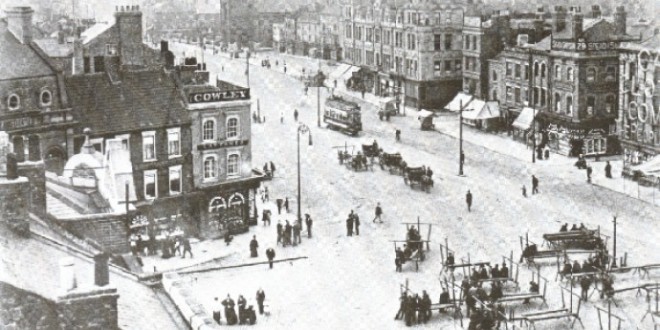 Stockton-on-Tees is in the North of England in the United Kingdom, 250 miles(400km) north of London and close to the North Sea.

Stockton’s population is presently about 178,000. Most of these people live in the four principal towns which make up the Borough – Stockton, the largest, with Billingham, Thornaby and Yarm.

The River Tees flows over 85 winding miles (140km) from the Pennine Hills to its wide estuary where it meets the North Sea.

Stockton retained its Borough status in County Durham until being absorbed into the County Borough of Teesside in 1968. This authority was abolished by the inauguration of the new County of Cleveland in 1974. This established a ‘two tier’ system of local government under which Stockton regained its separate identity as a town within a County. Further Local Government reorganisation abolishing Cleveland County, restored full independence and responsibility for all local services to Stockton Council as a Unitary Authority on 1st April 1996.

The first specific reference to Stockton occurs around the 12th Century in the Bolden Buke – the palatinate of Durham’s equivalent to the Doomsday Book. An ancient castle, once associated with King John (1199 – 1216), but destroyed on Cromwell’s orders around 1652, used to stand at the Southern end of the High Street. Stockton’s original charter as a borough was granted by King John around 1201 and a Chapel of Ease was built at Stockton in 1235, in those days part of Norton Parish. Stockton was granted its Market Charter by Bishop Beck in 1310 and still has one of the largest markets in the North, based in the broadest High Street in England.

Dominating the High Street, the Town House, built in1735, still serves its original purpose, where Council Meetings are held in its elegant Council chamber. At the northern end of the High Street stands Stockton Parish Church, built 1710 – 1712.

Heralding the dawn of the railway age and ensuring the town’s place in history forever, the first rail of the Stockton and Darlington Railway was laid 13th May 1822 near St John’s Crossing on Bridge Road. Hauled by Locomotion No.1, manned by the great railway engineer, George Stephenson, the first train made its historic inaugural journey form Etherley to Stockton to mark the official opening on Tuesday, 27th September 1825. In addition to being the first passenger railway in the world, it was also the first to use locomotives to haul both goods and passengers.

Thomas Sheraton, the furniture designer, was born in Stockton in 1751. A Baptist Minister and journeyman cabinetmaker, he moved to London in 1790, where his elegant designs brought him fame and fortune. Stockton chemist, John Walker, 1781 – 1859, holds the distinction of inventing the world’s first friction match.

In the Borough’s industrial past the River Tees nurtured trades and industries of all kinds, providing countless merchants, shipbuilders, labourers and their families with work and food. A significant port of the Tees since the17th Century, Stockton’s 19th Century industrial expansion quickly established the town as a leading centre in the North East. By the end of the 20th Century, heavy engineering industries had almost disappeared, employment being found mostly in service industries, retail trades and local government.

Thornaby, situated to the South of Stockton, formally within the North Riding of Yorkshire, is believed to have been in existence since around 800AD and is mentioned in the Doomsday Book. A wide variety of industries including shipbuilding, iron and steel, heavy engineering, sugar and flour milling, gave rise to a large new town. Thornaby aerodrome was an important RAF base during WW11 and home base to the North Riding 608 Squadron.

Thought to be Norman and dating from the 11th or 12th Centuries, Billingham began as a hamlet and progressed through the years in much the same way as other small villages. However, the last 70 years have brought enormous accelerated changes. During WW1, the Government started to build a nitrogen fixation factory at Billingham. After the war, Brunner, Mond and Co. Ltd., bought the site and set up the Synthetic Ammonia and Nitrates Co., which, in1926 became part of the Imperial Chemical Industries Ltd., a name to become synonymous with Billingham. ICI needed workers and workers needed houses, so the new Billingham was formed with housing estates spreading far across open fields and engulfing the old village community. In 1948, the council took the decision to create a new town centre scheme including a pedestrian shopping precinct, offices, hotels, flats, car parks and the Forum – an indoor sports and entertainment centre with a theatre, swimming pool and ice rink.

Annually since the early 1960’s, an International Folk Festival in the Town Centre has attracted visitors from around the region and performers from all over the world.

Yarm, a small town to the south of the Borough, which has been established for at least 13 centuries, has a Town Centre which is bounded on three sides by a bend in the River Tees. The main feature of Yarm is its wide High Street with cobbled verges bordered by many fine period buildings and delightful shops. The George and Dragon Hotel was the venue for the meeting of the Stockton and Darlington Railway promoters on 12th February 1820. Annually, in October, is held a three day street fair, a tradition dating back to the time of King John, one of the most important in the Romany calendar.

Within minutes of Stockton’s bustling heart, lie many pretty villages such as Carlton, Heartburn, Egglescliffe, Wolviston, Wynyard, Elton and Longnewton, all of which have attractive country pubs.

The innovation of the Tees Barrage by the Teesside Development Corporation has provided a unique opportunity to establish an impressive array of water based leisure facilities. Recent advances have brought tremendous benefits for the Borough and its people. With Britain’s newest University College, high tech industries winning fresh markets worldwide, superb cultural facilities located at the ARC, an extensive arts centre opened in January 1999, the annual Riverside Festival and much more, massive regeneration has taken place.