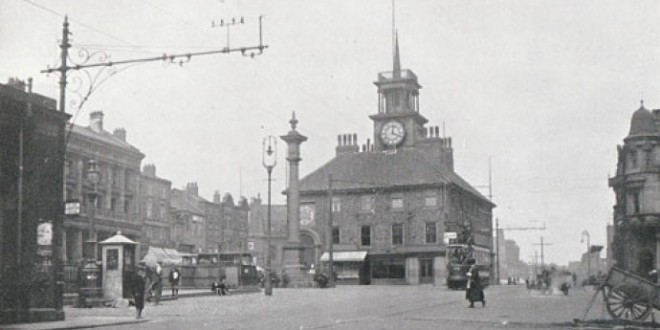 Stockton’s historic Town Hall – or, to give it it’s traditional name, the Town House – dates from 1735 in its present form.  Dominating the town from its position in the centre of the town’s High Street, it is a focal point for the town centre.  Theree times a week, a market is held around the Town Hall, authorised by a Charter of the Bishop of Durham in 1310.

Today, the Town Hall is still used daily for meetings, and the full Council gathers in the main Council Chamber once every six weeks to seal the important decisions relating to the authority’s business.  Apart from a brief period between 1969 and 1974, when Middlesbrough was the administrative centre for the now-defunct Teesside County Borough Council, Stockton Town Hall has been at the heart of all the most important decisions taken by Stockton Council since the day it was opened.

No offices are based in the Town Hall, however, with most of the Council’s administrative business taking place at the Municipal Buildings and other offices at Church Road, a few hundred yards away.

Renovations during the 1990s found that some parts of the building are even older, including some of the main structural walls in the centre of the building, which probably date from an earlier lock-up on the same site.  A Town House has existed on that site perhaps as far back as 1100, although today’s structure is not the original building.

The first factual reference is in Hatfield’s Survey and dates from 1382, when a plot of land available for the Manor (the site of the Town House) existed upon payment of 4 pence (old money) per year to the Bishops of Durham.  Around this time a Richard Maunce, as the “Major”, and his associates held the Farm of the Borough.  Before Local Government existed, the Bishop of Durham controlled the area and established a “Farm” of the Borough, giving the Burgesses of Stockton certain limited rights and freedoms such as the power to elect their own major (and it is from this word that the current word “Mayor” derives) and conduct their own local affairs.

The Town House was in effect the Mayor’s house which received rents, tolls, fines and admittances to the market.  Although the Mayor of the day lived there, it was not necessarily his permanent abode but was considered an administrative centre.

Some documents suggest it was rebuilt in the late 1400s.  200 years later, this building or a further replacement, was being used to house guests of the Borough. The building was described at that time as a “a mean thatched cottage”.

After the Restoration, prosperity came to Stockton, the thatched cottage was abandoned and a purpose-built toll booth, was erected immediately to the south of it.  The ground floor was slightly raised and open to the elements.  Proclamations were read from steps leading to this area.  The first floor was built on open arches and contained a long room (now used as a Committee Room) in which tolls were paid and meetings of Burgesses were held. In between the arches were effectively market stalls leased by the Bishops of Durham.

The toll booth contained a small lock-up or jail used to confine drunkards, scolds and rowdies along with those awaiting escort to Durham charged with more serious offences.  To the west of the toll booth stood the Stocks and the Whipping Post.

In 1744 further alterations were made to the building and the shops continued to be leased to individuals by the Bishops of Durham and were subsequently sub-let as shops to traders. The lease did not pass to the Town Corporation until 1939 when the shops were finally purchased and occupied by the then Stockton Council. This is the first time when the whole of the Town House was in municipal hands.

The Town Hall can claim one particular spot in world history – it was at a dinner held here in 1810 (to celebrate the opening of a new “cut” in the River Tees) that a Leonard Raisbeck, Recorder of Stockton, first suggested a railway or canal to link Stockton with the “interior country”.  The result, opened 15 years later, was the famous Stockton & Darlington Railway and, on September 27 of that year, a celebratory dinner took place at the Town Hall after George Stephenson had driven its opening train into the town.

During the early 1800s concern was expressed at the continuing use of the Town House as a jail where the cells were only five feet tall and offenders were passed into the cells sometimes through what was then a hatchway in the pavement outside. As a result, a Police Station was erected in West Row in 1851 and subsequently transferred to a new building in Church Road in 1871.

The building was substantially renovated in the 1880s, when the present layout of the Council Chamber was adopted. 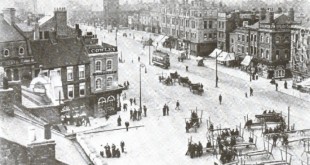