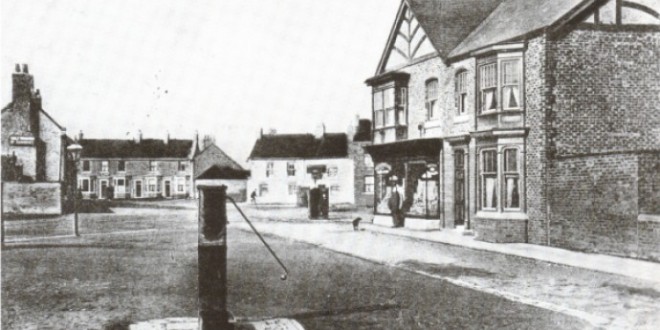 Billingham is a town just north of the River Tees, in the borough of Stockton-on-Tees, traditionally part of County Durham, in North East England. It was a Saxon settlement from about the 7th century onwards and St Cuthbert’s church has a fine tower of AD 1000. A late 7th century grave-marker from the church is now in the British Museum.

In 1801, the population was 355 people but the demand for explosives created by the First World War led to a massive expansion of Billingham. In 1917, it was decided by the government to build a plant to produce ammonia. Later this was used predominantly in the production of chemicals for fertiliser. Eventually, in 1926, this plant became part of the newly formed company, ICI. Anhydrite was also mined in the Billingham area from 1928. In 1934 plastics began to be produced there.

The use of Ammonia also led to the formation of one of Billinghams two football teams, Billingham Synthonia. This side holds the distinct record of being the only football team in Britain to be named after a synthetic product – Synthetic Ammonia.

Aldous Huxley visited the newly-opened and technologically-advanced Brunner and Mond plant at ICI and gives a fine and detailed account of the processes he saw. The introduction to the most recent print of Brave New World states that Huxley was inspired to write the classic novel (in which Mustapha Mond figures as a character), by this Billingham visit.

Henry Thorold in the Shell Guide to County Durham states: “This is one of the most extraordinary of experiences, a sight almost unique in England. On either side of the road are the works. Steaming, sizzling – tall steel towers, great cylinders, pipes everywhere… At night the whole industrial world along the banks of the Tees comes to life… brilliant with a thousand lights, the great girders of the Transporter Bridge dark in silhouette: a magic city.”

In the mid 1930s the population had grown to 19,000. After the second world war, the growth continued, with more housing being built as the town expanded northwards, reaching about 38,000 by the 1970s.

From 1965 onwards, the town has played host to the Billingham Folklore Festival.

In 1967, Billingham Forum was opened. This is a sports and leisure complex containing a theatre, swimming pool, ice rink and a number of sports halls which have staged gymnastics, archery, squash and judo as well as five a side football etc. Stars that have performed in the theatre include Arthur Lowe, David Jason, Penelope Keith, Timothy West, Carroll Baker, and Dame Anna Neagle. Proposals are being considered to regenerate Billingham Town Centre. A previous “Gateway” initiative proposed the construction of a new sports and leisure centre on John Whitehead Park to replace the Forum but did not provide a replacement for the Theatre. This proved highly controversial and was abandoned in November 2004.

From 1971 to 1988 ICI operated a small General Atomics TRIGA Mark I nuclear reactor at its Billingham factory. It also operated the coal-fired North Tees Power Station designed by Giles Gilbert Scott on the banks of the Tees to provide electricity for its plants. This was later put out of use and demolished in 1987. The site of the power station is now Billingham Reach Industrial Estate, an international wharf owned by Able UK Ltd.

ICI no longer operates in Billingham having sold many of its businesses during the company’s restructuring of the 1990s. Some of the company’s former manufacturing plants are still in operation, run by other chemical companies.

In 1983, NIREX announced a proposal to use the now-disused anhydrite mine as a site for the disposal of intermediate level nuclear waste. There was a huge public outcry, since despite the suitability of the site in geological terms, it was very close to a large population centre. Subsequently, in 1985, the plans were dropped.

Billingham Beck Valley Country Park was constructed from a reclaimed industrial waste tip and has steadily grown to include former grazing land to form a 120 acre site including wetland habitats. Designated as a Local Nature Reserve by English Nature in 1992, in 2005 it won a Green Flag Award. The Beck itself is one of the major tributaries of the River Tees and has a tidal reach around the former ICI site.

Between 1923 and 1968, Billingham had its own Urban District Council which built, among other things, Dawson House, Kennedy Gardens and Billingham Golf Club (the UK’s first municipally-owned club). It was later absorbed into the County Borough of Teesside and then in 1974 the arrangements were refashioned once more with the return of a separate council for all of Stockton. The Department for Communities and Local Government is currently considering the creation of a new Town Council for the town, a petition to Stockton Borough Council and referendum held in 2003 having both given assent to the proposal.

It is served by Billingham railway station.

The town is effectively split into two separate areas by name, Old Billingham (the area around the village green adjacent to St Cuthbert’s church and built up around the ICI works) and the more planned estates that have spread out since the 1950s, increasing the town’s size and borders towards the villages of Wolviston and Cowpen Bewley (to the point of almost incorporating them).